We are proud to be supporting the work of Towards a Better World in Uganda.  Below is an inspiring update from their efforts to improve the livelihoods of communities through establishing a 50-acre farm in northern Uganda. In this post, Directors Matt and Wendy Napier share the first-hand trials and victories the team has experienced in establishing this project.

Palorinya mass farming project by Towards a Better World and CEFORD

The project is a 50-acre farm in the Moyo district in northern Uganda, close to the refugee resettlement communities along the South Sudan border. The goals of the farm are to improve food security in the area, create employment, and increase local farming knowledge.

The land is situated on the banks of the Nile river which will enable them to utilise the water from the river during the dry season.  There is a shortage of vegetables going to market during the dry season which pushes prices up, often outside of the affordability for refugees, so there will be huge demand for our produce and we can ensure prices are kept to a reasonable level.

The farm is run by an Extension Officer employed by CEFORD (Sam or commonly known as Dulu) who acts as the Farm Manager and the project is overseen by CEFORDS project Coordinator (Mawa).

Clearing of the first 5 acres started in early January 2020. Initially, we wanted to use manual labour to clear the land but it quickly became obvious that machinery would be required to clear and prepare the virgin land due to the harshness of the terrain.  Manual labour was however used for clearing the farm access road and preparation of areas for nursery beds. 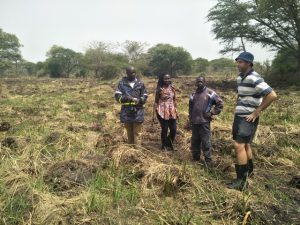 Once enough land was cleared to start the vegetable garden Sam engaged a small team of locals to plant Sukuma, onions, tomatoes, and cabbages.  These were all planted in nursery beds and later transplanted into plots at the end of the farm closest to the Nile. All up there was about 3.5 acres of vegetables planted. 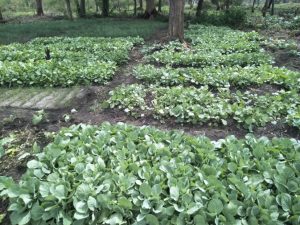 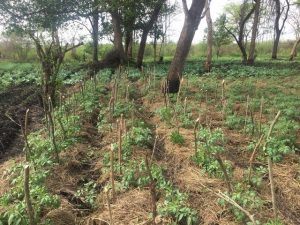 Tomato seedlings after mulching and staking

In early April, not long after the vegetables had been transplanted there was unseasonal heavy rains in South Sudan which sent a large amount of water down the river that forms the boundary of our farm and into the Nile. Overnight, the river had swollen so much that it partially flooded our farm, effectively wiping out all our cabbages and about 25% of the tomatoes.

Whilst this situation was not ideal it did teach us a valuable lesson about the possibility of this happening and next year we will plant our vegetables further away from the river to ensure this doesn’t happen again.

This called for some quick decisions to be made including sourcing a temporary site for transplanting of onions that had been planned for that week.  A local farmer allowed us to use a portion of his land as long we covered the cost of clearing the land.  A team was quickly formed to clear and prepare the land so the onions could be transplanted.

Learning that the original farm site is so susceptible to flooding gave us the opportunity to negotiate with the landlord to secure another 25 acres in a slightly more elevated location to prevent the prospect of flooding for our future maize crops and some vegetables in wet season. This was granted and is currently being cleared so that around 10-15 acres of Maize and 4-5 acres of Sukuma can be planted. Hopefully, this will be completed by early July.  The original site will now be dedicated to planting rice in the wet season and growing vegetables in the dry season when the proximity to the river will be ideal.

Unfortunately only a month or so after the first flood, southern and eastern Uganda received record rainfall pushing the water level in Lake Victoria to record highs so the Government decided to gradually release water into the Nile which in turn flooded our farm. Unfortunately, this wiped out the remaining tomatoes and Sukuma.  All of a sudden we were wading through a foot or so of water to get to them. Whilst it was very sad and heartbreaking to see we have to understand that these rains were probably a once in a 100-year event so the chance of it happening again is very remote in the near term. 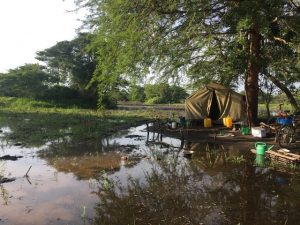 Floodwaters encroaching on the workers’ tent 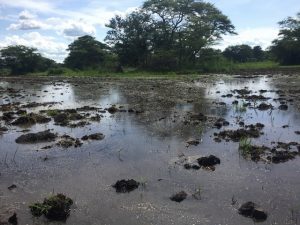 Harvesting of the Sukuma had already commenced but the tomatoes were still a few weeks off so it was a great concern as we watched the water levels rise.  However, by the time the floodwaters became too much they were able to harvest the Sukuma for 6-8 weeks and the tomatoes for 2-3 weeks which managed to generate healthy sales (approximately $800-$1000) before the remainder of the crop was lost. This virtually cut the lifespan of both crops in half but provided the farm manager with enough time to learn some more valuable lessons.  Firstly, the farm management had expected tomatoes to be the most sought after produce but it was actually the Sukuma that was hugely popular, and as it requires significantly less maintenance than tomatoes so we will be dedicating much more land to Sukuma in future and reducing the number of tomatoes. 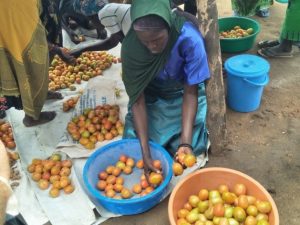 Produce being sold at market

Given the high demand for Sukuma, the plans are to increase the number of acres from about ¾ of an acre to 4 acres and work on a system of monthly plantings to ensure produce can be harvested all year round. We believe the demand is that high that we should have no problem selling it directly from the farm and also taking it to neighbouring villages to be sold at market. Our goal is to have around 4-5 acres available to be picked all year round. This will provide very good income for the farm and hopefully, bring in about 40 million shillings in sales each year (AUD $16,000). This will be great for the business as it will go a long way to covering our operating costs and will also be a huge boost for food security in the region.

Tomatoes had probably been a little disappointing; the price we were getting for the tomatoes was a little lower than anticipated and the amount of maintenance required is quite high. The low prices were mainly due to Coronavirus as many exporters were not able to get their products to overseas markets so flooded the local markets at ridiculously low prices simply to avoid completely losing on their harvest.  Also, many people were staying away from markets during the lockdown so there was a big oversupply especially from the capital Kampala. Truckloads were trucked up north to the refugee camps and flooded the market putting downward pressure on prices. We believe once the virus settles down and things start to return to normal there will certainly be a market for our tomatoes. In saying that, the cost of producing tomatoes is a lot higher than Sukuma, onions, and cabbages. They require mulching, weeding, staking, pruning and re staking, and are very susceptible to pests and diseases. So we need to ensure that it is still cost-effective to farm tomatoes but want to continue in the near term as we believe the supply from Kampala will start to dry up and prices can return to a more normal level.  They will also be in high demand in the dry season so that is another area to look into if we can generate enough water supply.

On the upside, they quickly turned their attention to planting rice in the flooded area and through a combination of manual labour and tractor harrowing, were able to plant about 15- 20 acres of rice between the first and second floods.  By the time we left the rice was a couple of feet tall and should now thrive as the water levels will start to recede over the next month as the rains become less frequent. Two different methods of planting were used to plant the rice; linear (planting in lines) and broadcasting (literally just scattering the seed). We did both as we wanted to see which one would produce the best yield. The cost of broadcasting is a lot cheaper than linear but linear is the recommended Agronomic practice as it’s then easier to weed and harvest as you can walk between the rows without damaging the crop. So it will be interesting to see what results they get to determine which method is used going forward. 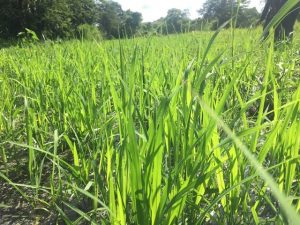 Rice germinating in a flooded field

Whilst we haven’t had a lot of luck with the flooding of the farm, fundamentally I believe this farm has great potential going forward and will thrive during the dry season.  It is planned to purchase a pump and generator before the commencement of dry season so that water can be pumped from the Nile which will give us a huge advantage.

Future plans are to plant 3-4 acres of cabbages, 4-5 acres of Sukuma, 3-4 acres of onions – all on a continuous rotational planting system to ensure year-round harvesting.  Other vegetable crops may also include eggplant and cowpeas (a popular leafy green).  Plus we should be able to plant 25-30 acres of rice and a similar amount of Maize, both of which can be harvested twice a year.

We have also had a few issues with James (from our failed taxi business) who is trying to make things hard for us in that area. He is friends with a guy who works in the Office of the Prime Minister (OPM) and is responsible for overseeing all NGO projects in the refugee zone and he is starting to make things hard for us, asking for reports that other NGOs that aren’t required to provide. But in saying that our charity partner is fully aware of the situation and is handling it well.

Dry season farming is going to be a huge plus for us.

Also, refugees are now starting to be given money instead of rations in some cases, so they will be able to buy our products either from us directly or from ladies selling our produce at the market.

We had a discussion from a project officer from one of the other NGOs responsible for food distribution and they are very interested in working with us to essentially contract the supply of certain quantities of produce.  It will take us a while before the farm is ready for that but it’s definitely a positive indication of the demand.

In conclusion, I am happy with the farm and it has great potential to achieve our goals. Expansion is certainly an option but we want to see things running a little more smoothly before we consider it. We also have to remember that the farm is only 6 months old and we have done a lot of the groundwork in clearing the land ready for farming and making good connections with selling our produce to market. There are always things to work on and we will keep a close eye on it over the next few months but there is certainly huge potential.

The CEFORD Project Coordinator, Mawa, is a very smart man and is committed to the project and seeing it become the success we know it can be. He has just recently had a family tragedy and will be away from the project whilst he continues grieving, but expect him back on board in the next week or so.